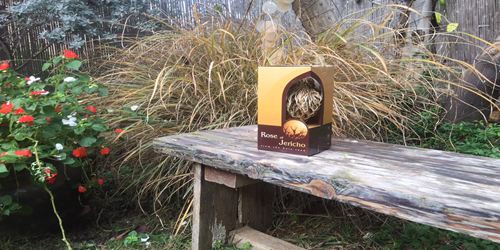 The origin of the name “Jericho rose” is a translation of the popular name of the plant that was common in the Crusader era in Europe ” The real Rose of Jericho ” addition comes to indicate the Christian belief that the plant is a “living plant” – a plant whose behavior is reminiscent of Jesus’ return to life. This belief comes because the (dead) plant opens in the rain and so the seeds can be distributed. Since the plant was dead, its movement was miraculously comparable to Jesus’ return from the dead. There are other kinds of plants that open in the rain but in this plant the movement is most prominent and is therefore called the real Rose of Jericho.

You can track your order here

Real and fake Rose of Jericho

What our customers think about us

Select your currency
GBP Pound sterling
USD United States (US) dollar
Font Resize
Accessibility by WAH
Need Help? Chat with us
Start a Conversation
Hi! Click one of our member below to chat on Whatsapp
The team typically replies in a few minutes.
Rose of Jericho
REAL ROSE OF JERICHO